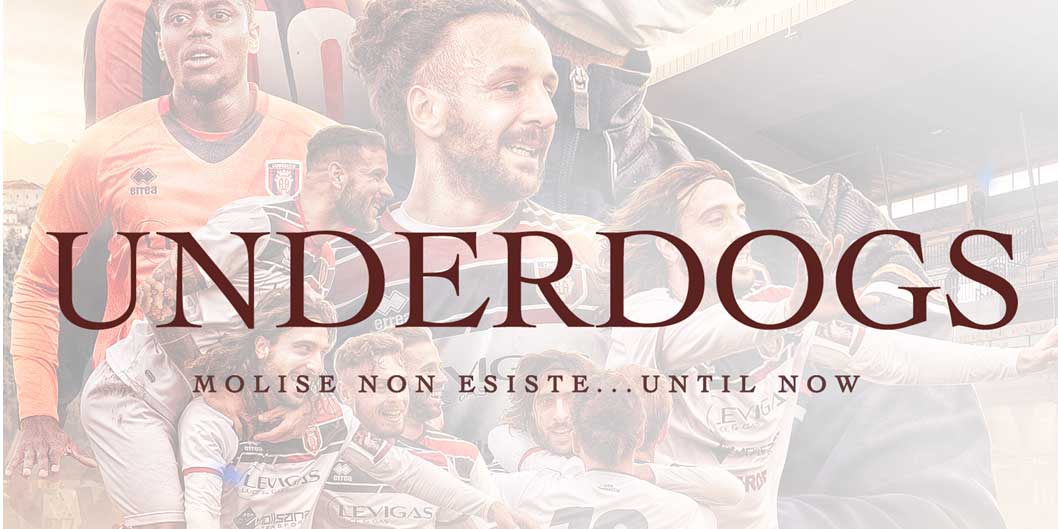 Sponsored by Colavita, the six-episode series will provide unprecedented behind-the-scenes access to one of European football’s most ambitious clubs SS Campobasso

NEW YORK – March 30, 2021 –In partnership with SS Campobasso and Studios, a North Sixth Group Company, Italian Football TV (“IFTV”) today announced “Underdogs”, a first-of-its kind original content series will debut on May 26th. The series will be promoted on IFTV social media platforms and will air on IFTV’s YouTube channel at 9 PM EST on May 26th.

“We are grateful to the Colavita family for partnering with us and sharing our vision and passion for Campobasso and the Molise region,” said Matt Rizzetta, Chairman of North Sixth Group, which acquired an ownership interest in SS Campobasso in late 2020. “Our club’s mission is to represent the underdogs, expats and immigrants across the world. Thanks to the generosity of the Colavita family, we are able to bring the quintessential underdog story to life on the screens of IFTV for millions across the world to experience.”

Filmed on location in Italy and New York, “Underdogs” will take viewers behind the scenes as SS Campobasso fights its way up the ranks of the European football pyramid. Campobasso currently sits atop the table in the fourth-tier of Italian football, having previously reached Serie B and defeating top clubs in Italy such as Juventus at the heights of the club’s success in the 1980’s.

“Underdogs” will provide unprecedented access to the inner workings of one of European football’s most ambitious clubs, including owner’s meetings, training sessions, matchday scenes, and supporter interactions.

“Underdogs” will be streamed exclusively on IFTV social media channels. IFTV is the most widely viewed online video channel and social media content service for fans of Italian football in North America. IFTV boasts more than 50 million monthly impressions across its platform, including 6.6 million views on YouTube and 120,000 followers on Instagram.

“We were intrigued and committed to producing this original content series from the first meeting we had with the Campobasso ownership team,” said Marco Messina, Co-Founder of IFTV. “We have seen major streaming platforms such as Netflix and Amazon Prime follow the world’s most prestigious clubs like Manchester City, Juventus and Tottenham. However, never has there been an all-access series behind a smaller club that is aspiring to dream big. ‘Underdogs’ will have so many interesting storylines that people from all walks of sports and life can appreciate and relate to, and we couldn’t be happier to be the content platform behind this series.”

ABOUT ITALIAN FOOTBALL TV (IFTV)
IFTV is the most widely viewed online video channel and social media content service for fans of Italian football in North America. IFTV boasts more than 50 million monthly impressions across its platform, including 6.6 million views and 45,000 subscribers on YouTube, as well as 120,000 followers on Instagram. IFTV has produced original content including studio shows, live broadcasts, and interactive content for millions of fans of Italian soccer across the world. Additionally, IFTV’s “Calcio” merchandising line has become one of the most popular and best-selling lines of Italian football products in the North American market. For more information, visit www.ItalianFootballTV.com

ABOUT SS CAMPOBASSO
SS Campobasso is a professional Italian football club currently playing in the fourth tier of Italian football. Based centrally between Rome and Naples in the Molise region of Italy, the club was founded in 1919 and plays its home games in the 25,000 seat Stadio Nuovo Romagnoli. The club gained popularity in the 1980’s for its rabid fan base and exciting style of play, which included wins and draws over Juventus, Lazio, AC Milan and some of the top clubs in Italian football.